Triumph adds a new limited-edition Steve McQueen model for 2022, co-developed with McQueen’s estate. Only 1,000 units will be available. 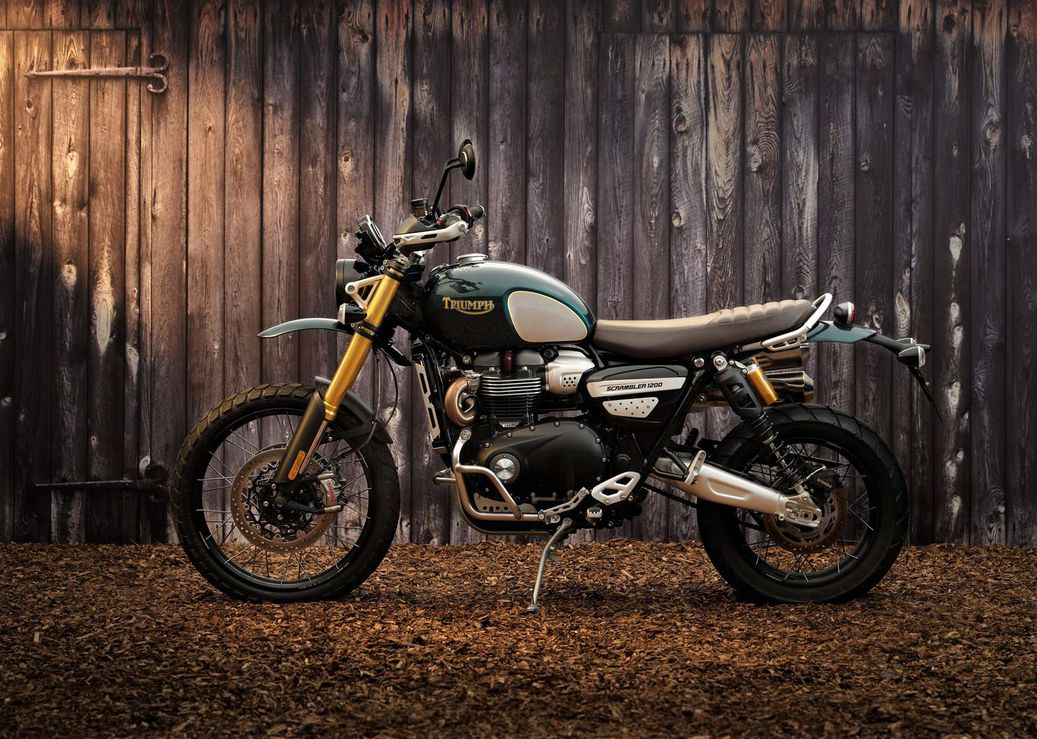 Triumph has just released the Steve McQueen Limited Edition, based on the Scrambler 1200 XE. Only 1,000 units will be available. (Triumph Motorcycles/)

Triumph has done a pretty good job of marketing its bikes from a heritage standpoint over the years, tapping into the firm’s long history with racers, musicians, movie stars—basically pop culture figures writ large. Think Marlon Brando, James Dean, Bob Dylan, Steve McQueen—they all rode Triumphs at one time or another, and the company has made sure to remind us of that from time to time. But it was McQueen who actually raced them off-road, so it stands to reason that the company’s classically styled scrambler models, the Scrambler 1200s, would be the latest models to get tapped for the pop culture treatment (there was also a Scrambler 1200 tie-in with James Bond, but he’s fictional—and the movie has yet to see the light of a theater. Enter the new Scrambler 1200 Steve McQueen Edition, which Triumph has just released for 2022. 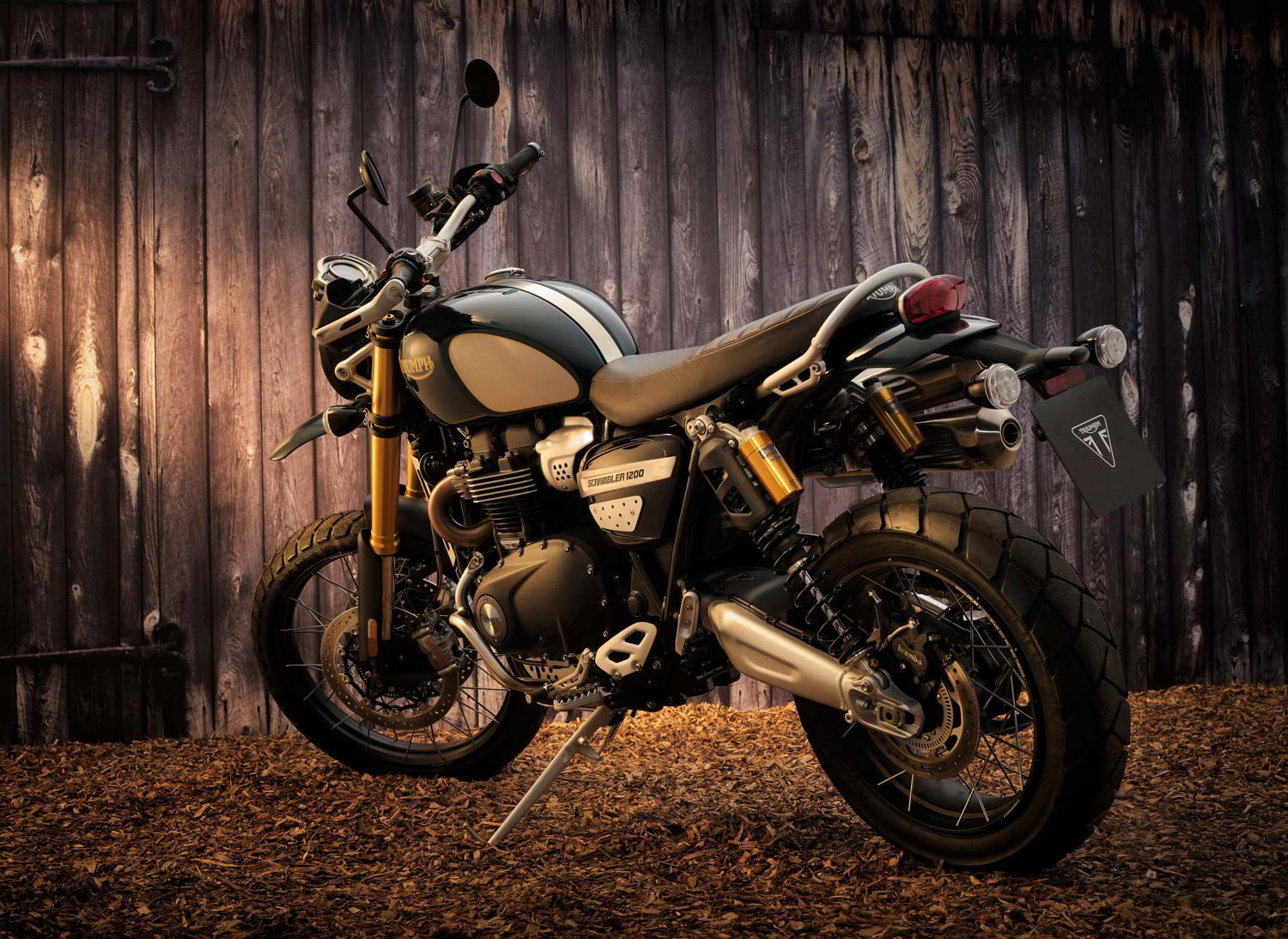 Triumph dropped the news of its latest limited edition in the 2022 model release of its updated Scrambler 1200 machines (the XC and the XE), with word that the Scrambler 1200 Steve McQueen Edition would be joining the lineup as a special model inspired by “the original competition-spec Triumph TR6, made famous by the legendary barbed-wire jump in the iconic 1963 World War II classic The Great Escape,” and developed in partnership with the McQueen family. (Ducati had already poached the ‘desert sled’ phrasing, so Steve McQueen Edition made more sense anyway). 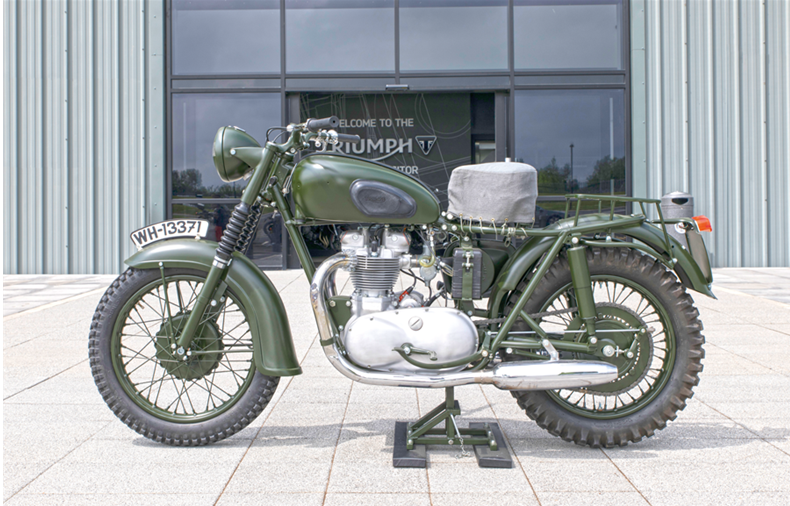 The McQueen Edition was “inspired” by the competition-spec Triumph TR6 used in The Great Escape jump scene; that bike sported a specially designed ISDT suspension setup made for the stunt. (Triumph Motorcycles/)

The bike uses the new 2022 Scrambler 1200 XE as the base model, so the underpinnings are all recognizable elements, with a 21-inch front wheel, wide handlebar, and twin high-mount pipes, all packaged around the high-power 1,200cc parallel-twin engine with a Scrambler-specific tune. The XE’s other higher-spec components also carry over to the McQueen bike, with optimized-cornering ABS and optimized-cornering traction control managed by an inertial measurement unit measuring the roll, pitch, yaw, and acceleration rates. The XE/McQueen also has the larger 47mm fully adjustable Showa USD fork with nearly 10 inches of wheel travel and at both ends, and all three of the 2022 Scrambler 1200 models also bring a torque-assist clutch, cruise control, keyless ignition, all-LED lighting, and an underseat USB charging socket as standard features. 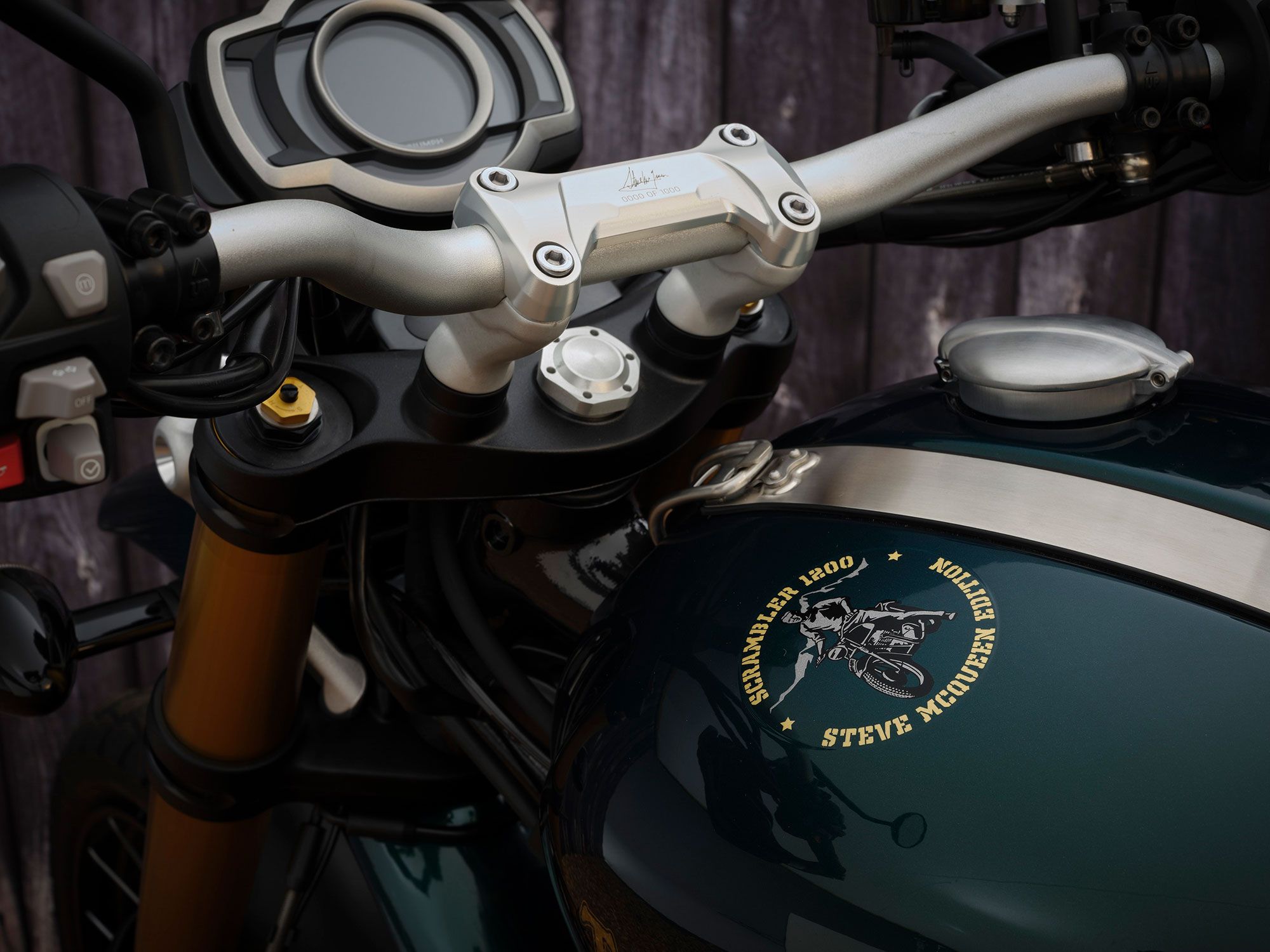 Each bike is individually numbered (on the handlebar) and sports a stylized McQueen graphic. (Triumph Motorcycles/)

But the McQueen bike is an homage to its namesake’s affinity for desert racing, so it plays up that angle with the addition of premium parts and accessories to sell the narrative. That translates into an exclusive Competition Green custom paint scheme with hand-painted gold lines to frame the hues, a stainless steel tank strap, and brushed foil knee pads. More branding is revealed with the Steve McQueen tank graphic, aluminum Monza cap, and stainless steel engine protection bars all included as standard features.

The bike also comes equipped with other high-end Scrambler add-ons, like a laser-cut aluminum radiator guard, a swank ribbed brown seat with contrast stitching, and a high-mount front fender also painted in Competition Green treatment (as is the rear). The bike is also primed for the My Triumph Connectivity System right from the box, allowing riders to access their phone calls, tunes, and use turn-by-turn navigation. 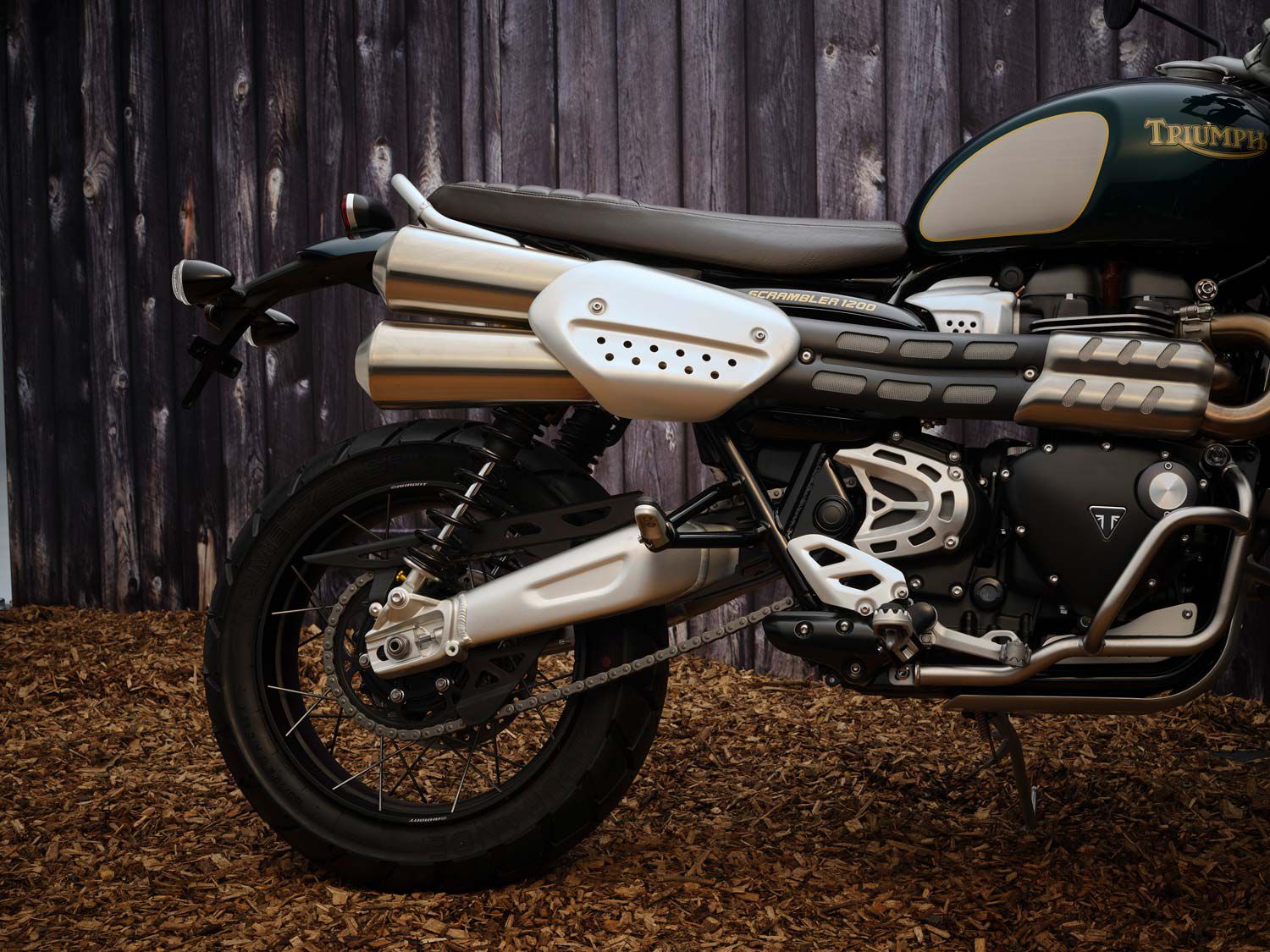 All three Scrambler 1200 models, including the McQueen Edition, get engine and exhaust revisions to meet Euro 5 emissions standards. (Triumph Motorcycles/)

The less glamorous details lie beneath the finely finished exterior. For 2022, Triumph had to meet new Euro 5 standards, so all the Scrambler 1200s, including the McQueen Edition, received a series of mechanical and electronic changes, including engine revisions, air-injection changes, and an exhaust rework with the catalyst being moved farther back, to help clean up emissions (moving the cat also resulted in a reduction in the amount of heat reaching the rider). The engine also got a new tune to achieve the desired emissions goal, says Triumph, but all those changes also resulted in the bikes gaining 13 pounds.

Still, engine performance numbers are relatively unchanged from last year’s models, with a claimed torque peak of 81 pound-feet at 4,500 rpm and 90 hp at 7,250 rpm, which is pretty handy given the motor revisions.

The McQueen Edition will have a limited run of just 1,000 units worldwide, and each one will be individually numbered, with Triumph further underscoring the bike’s exclusivity by way of a certificate of authenticity featuring the signatures of Triumph CEO Nick Bloor and Chad McQueen, the son of Steve McQueen, issued with each bike.

Taking Your Motorcycle Out Of Storage after Long Winter

A PHP Error was encountered