Ducati showcases its accessories catalog by outfitting this 2021 Streetfighter V4 S with carbon fiber and titanium goodies in this review.

Ducati’s Streetfighter V4 is easily one of the most, if not the most, aggressive high-performance naked bikes the world has seen. And it gets even more rowdy when bathed in accessories from the Ducati Performance catalog. Dripping in carbon fiber, magnesium, and titanium this $47,787.43 (as tested) V4 S is as wild as an accessorized production bike gets. 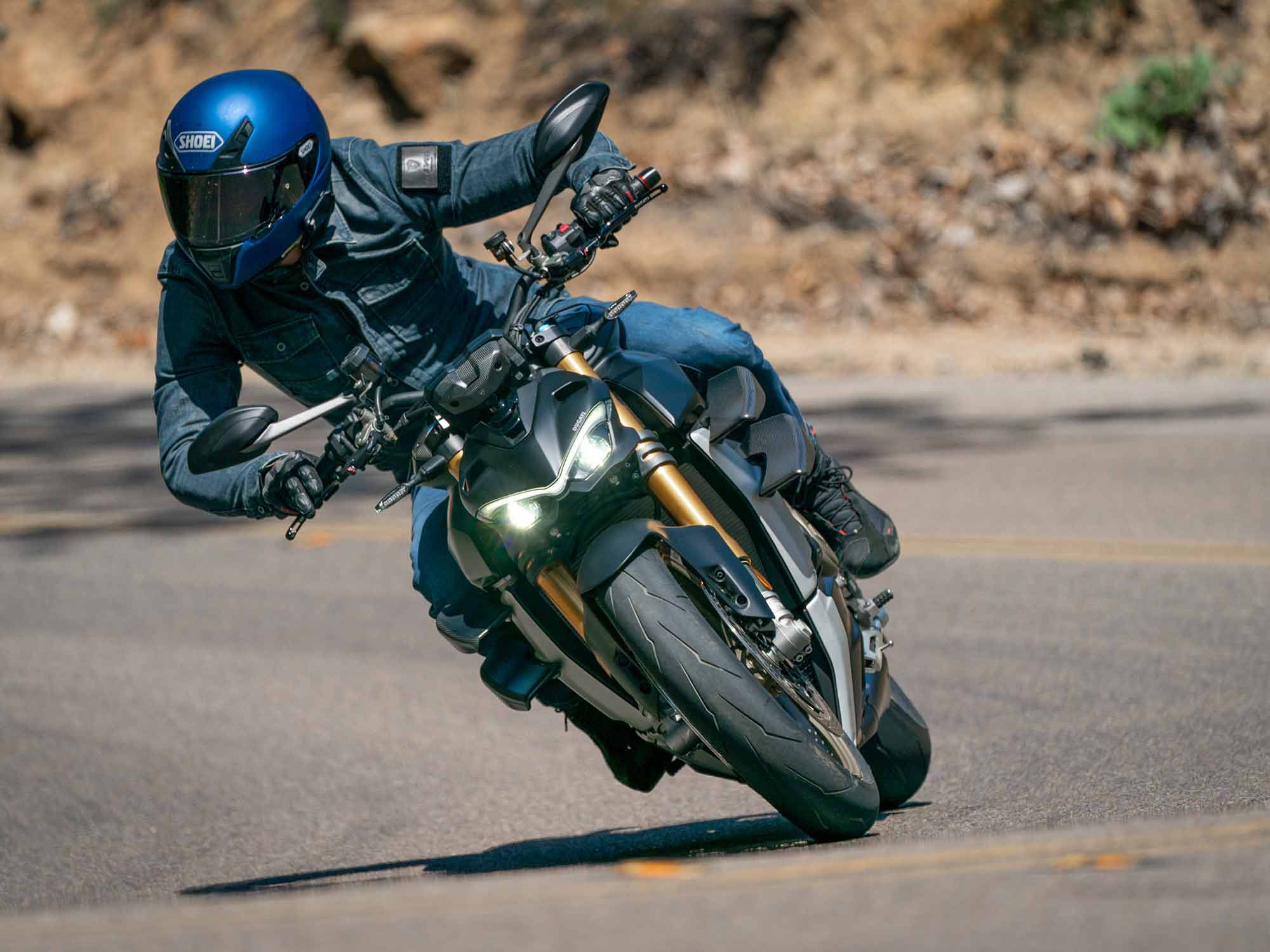 This $47,787.43 (as tested) Ducati Streetfigther V4 S is easily one of the most exhilarating sport motorcycles money can buy. 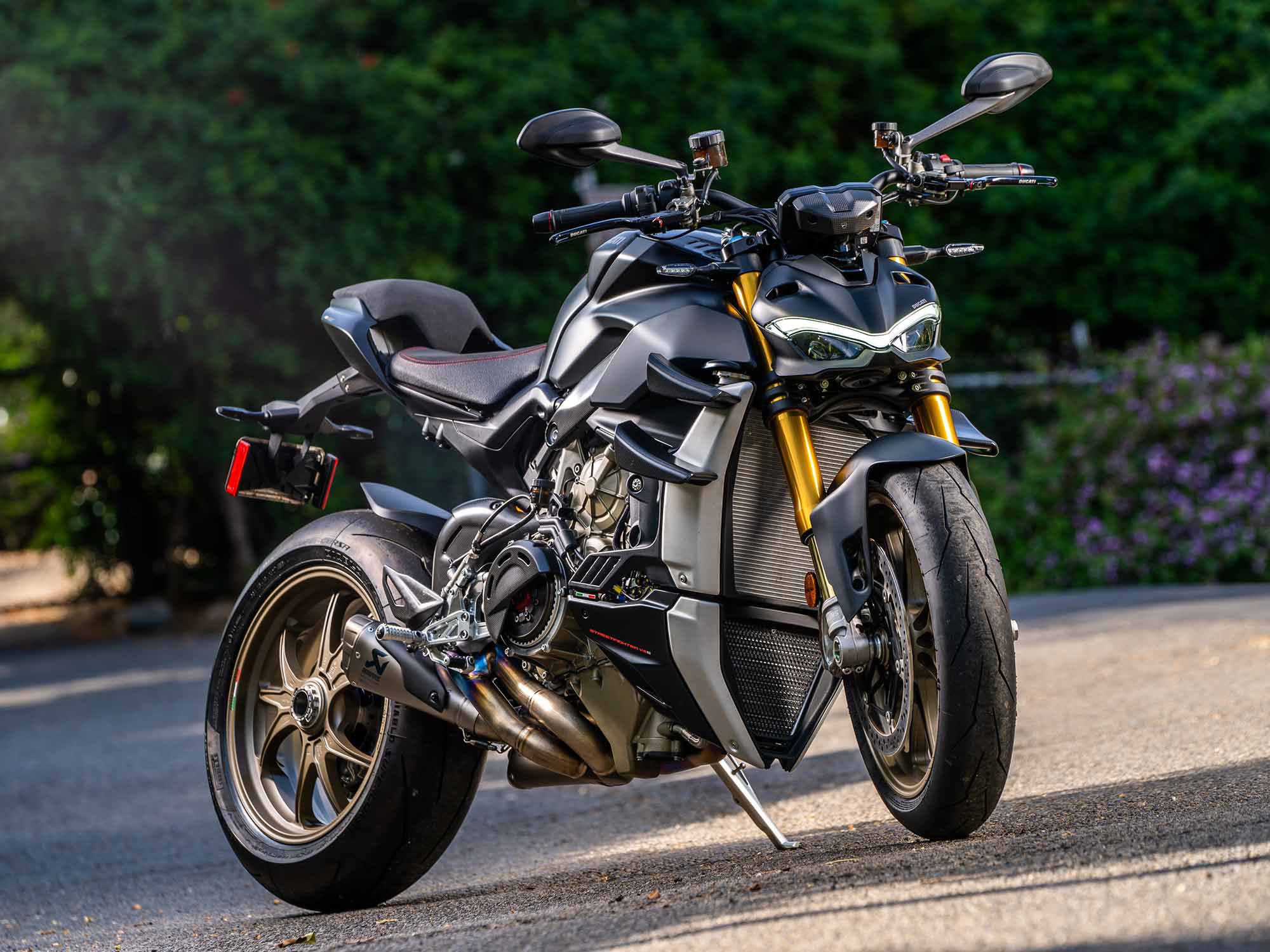 As usual, the highlight of this Ducati is the insane performance of its 1,103cc V-4 engine. From bottom to top, this engine has a powerband that feels like it came straight from satan’s workshop (good thing). And it’s even more vicious with the $5,541.15 handmade titanium Akrapovič exhaust and $3,548.65 dry clutch. If you’re a die-hard motorsport enthusiast, this is music to your ears. 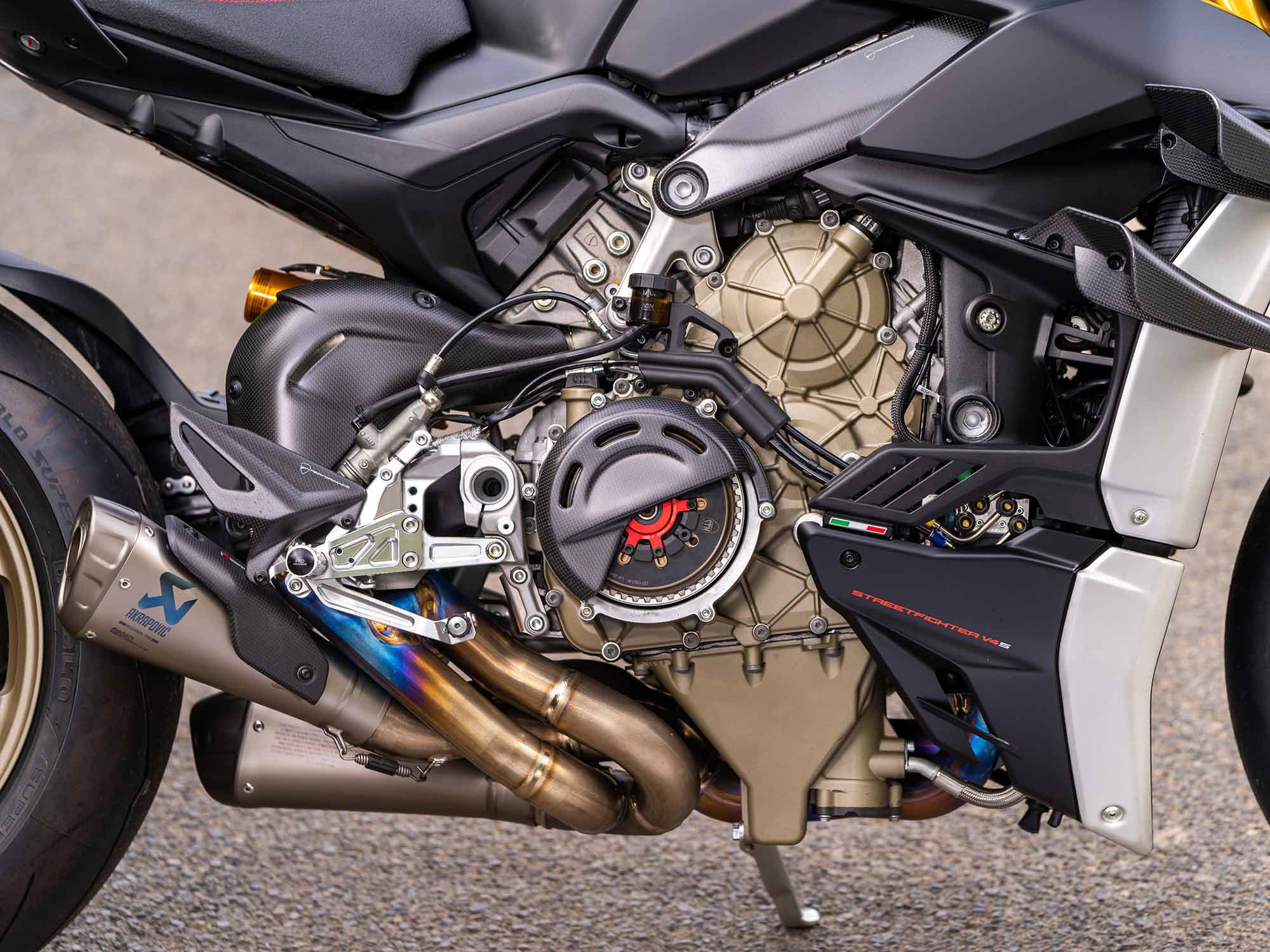 The dry clutch conversion kit is an absolute must-have. If you’re an old school Ducati superbike guy or gal, you need this setup.

There are a lot of neat-sounding and high-performance two- and four-wheeled vehicles out there, but nothing sounds as mean, nor accelerates as quickly as this Streetfighter—especially when you’re giving it the beans near its 15,000 rpm redline. 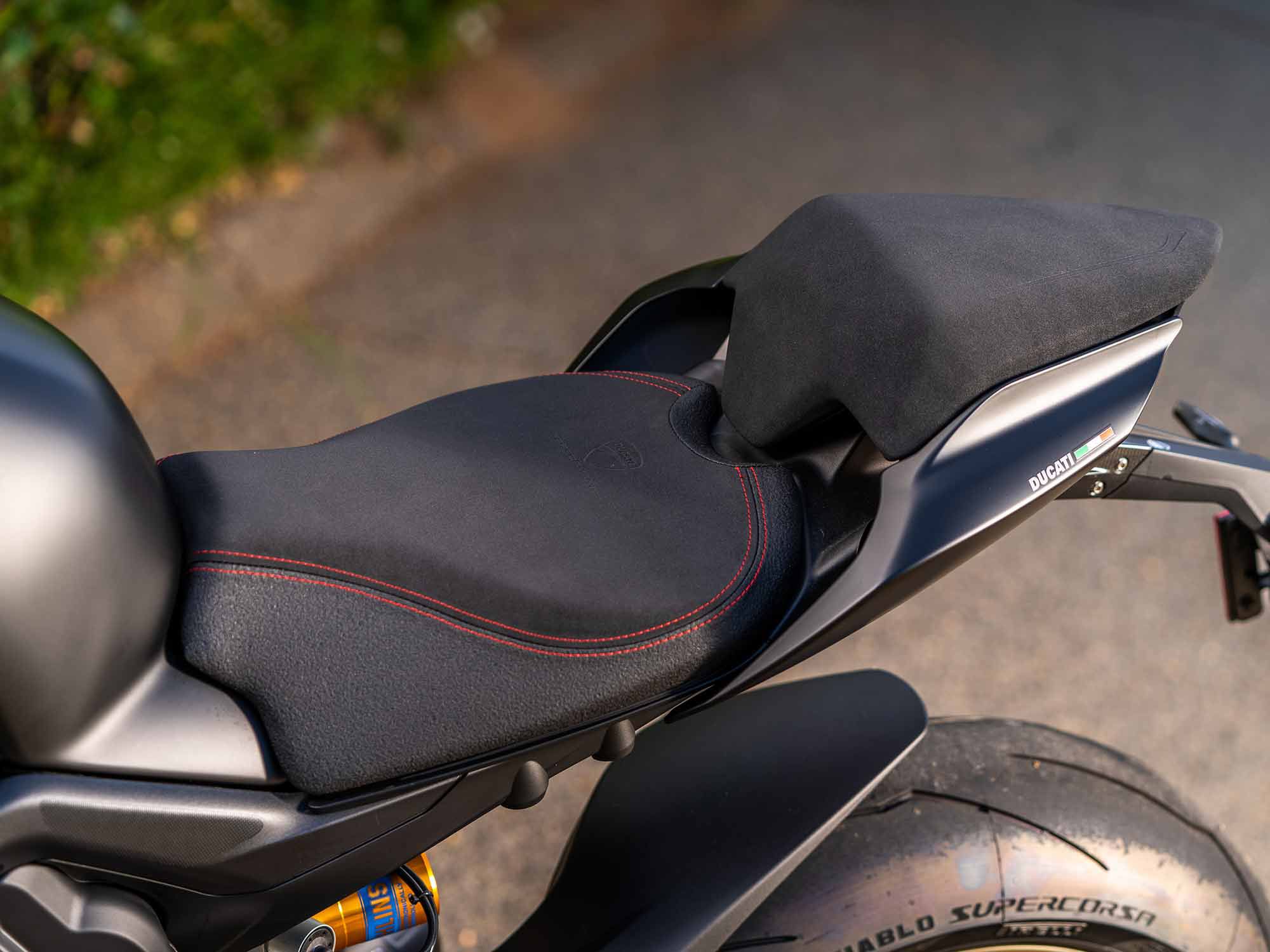 The accessory racing seat offers a surprising level of comfort. However, it’s a tad too grippy for our taste. Short riders beware: It raises the seat height to just over 34 inches.

Yet, if you lug the engine at lower revs and short-shift it through the six-speed gearbox, the Streetfighter happily complies offering quasi-civilized manners. Miles per gallon figures in the high 30s are also possible if you stay off the pipe. Realistically however, expect around 30 mpg if you ride it like you’re supposed to. 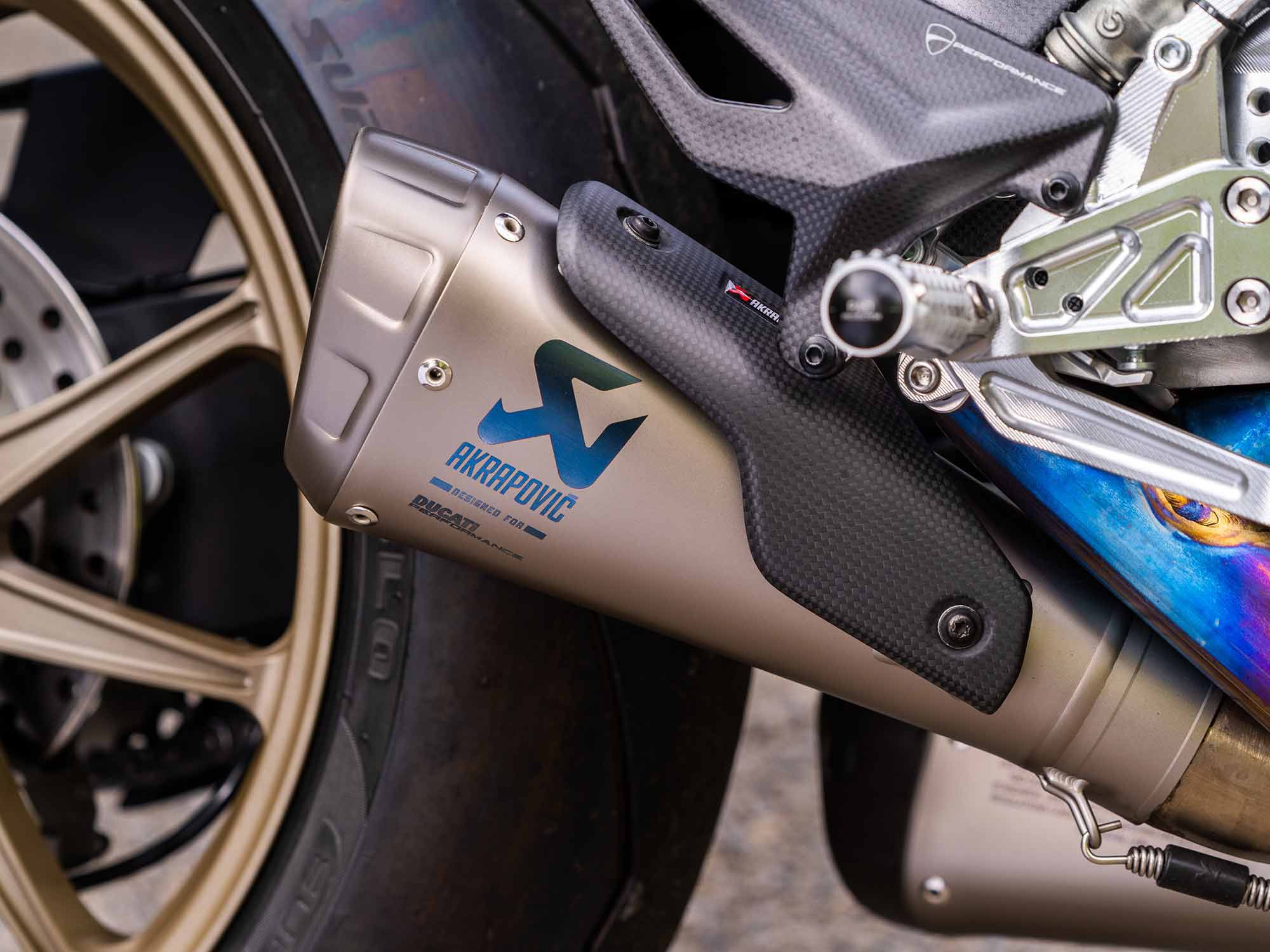 The sound that emits from this twin-muffler Akrapovič titanium exhaust is pure ecstasy. It is a tad loud, however, for use in urban areas.

The Öhlins semi-active suspension performs well and filters out the effects of worn pavement yet provides suitable road holding at lean with generous servings of throttle. We preferred the dynamic setting in its most aggressive suspension program. 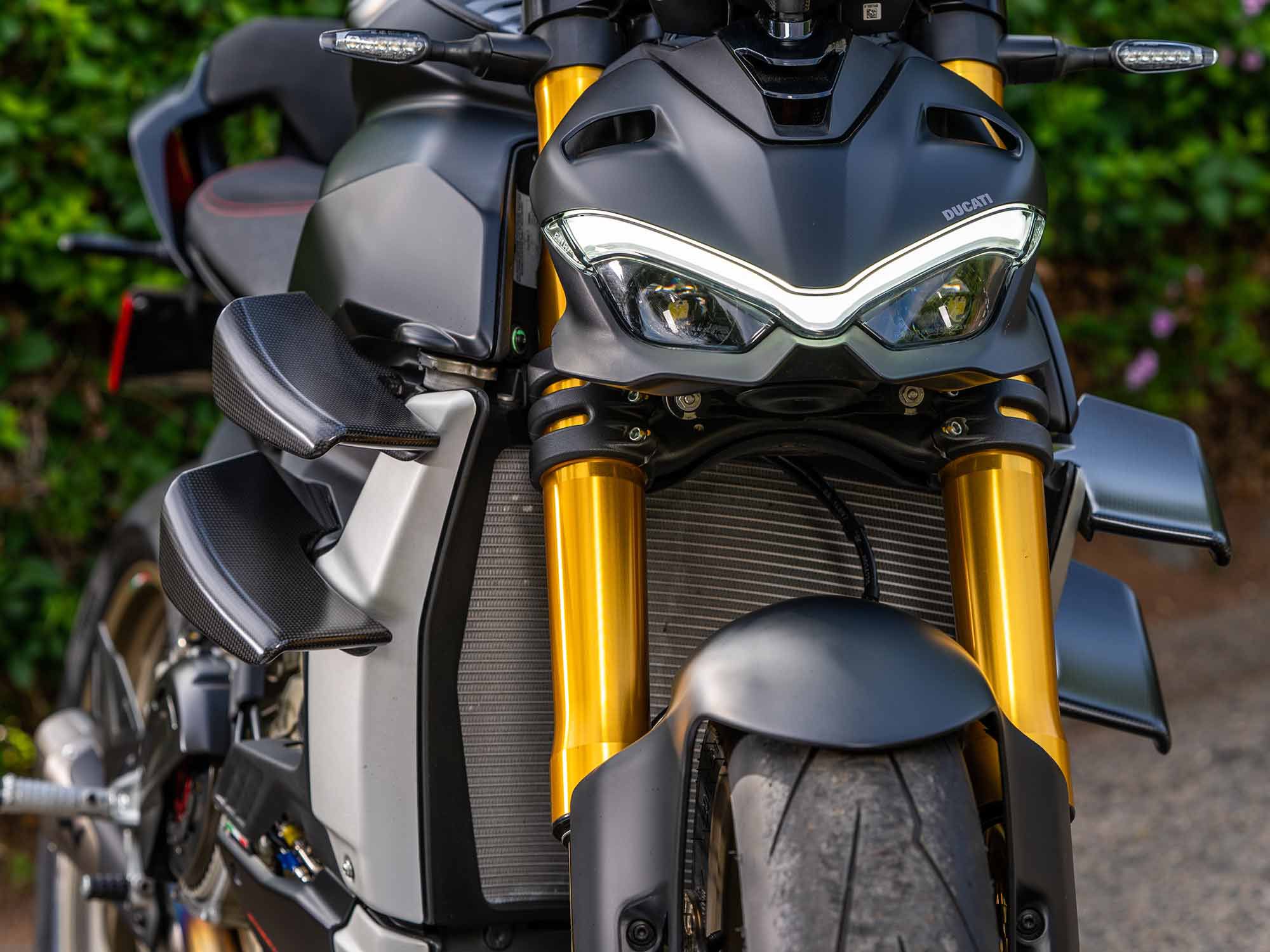 Real carbon fiber winglets can be fitted for $1,435. The winglets create upwards of 60 pounds of downforce at 160-some mph.

A high-end electronics package allows for plenty of adjustability. The electronics have a wide range of adjustment allowing the rider to tweak the engine, traction control, and ABS character to their skill set. Advanced riders will especially appreciate the lofty performance barrier the electronics allow. For instance, the ABS programming in Level 3 (most restrictive) is at a higher level than some manufacturers’ setups on modern liter-class superbikes. Well done, Ducati. 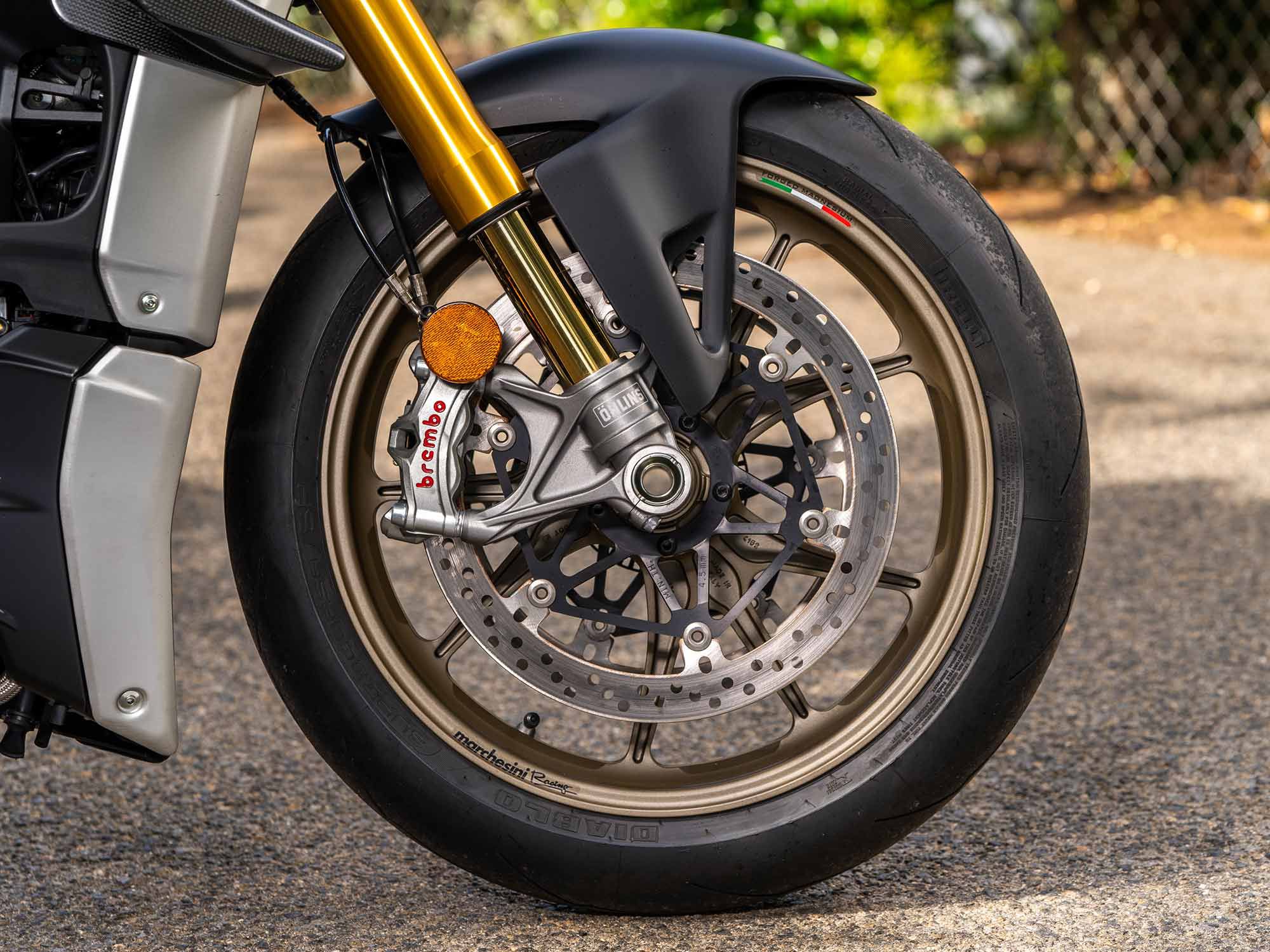 This Streetfighter V4 S project bike rolls on a set of forged magnesium wheels from Marchesini ($5,227.50). The wheels are 1.5 pounds lighter than the forged alloy setup on the V4 S. 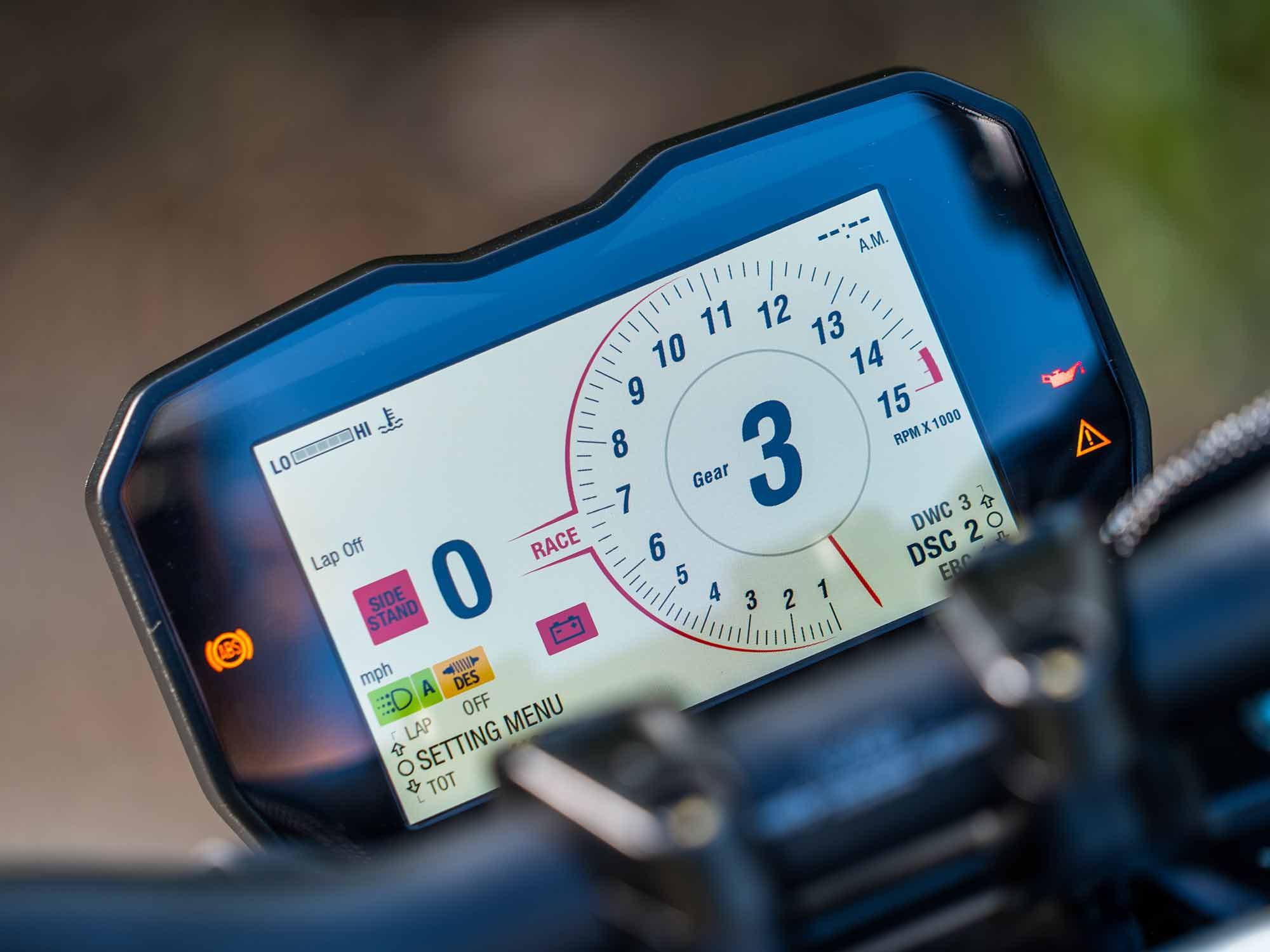 A 5-inch color TFT dash display keeps tabs on machine vitals. The display offers crisp fonts, however the user interface could be improved and the size could be larger compared to rivals in the segment.

A 5-inch color TFT display keeps tabs on it all. It’s a reasonably sharp-looking display, but it should be larger and the user interface remains well behind the competition. The menu navigation and switch gear are clunky and Ducati could learn a thing or two from Apple, BMW, and Yamaha.

With its 4.2-gallon tank topped off, this bike weighs about 14 pounds less than the standard V4 S courtesy the Akrapovič exhaust (12.1 pounds less) and forged magnesium wheels (1.5 pounds less). And that makes a difference with the Streetfighter offering incredible agility for a liter-plus-sized naked bike. Stability at speed is decent and its overall handling is mesmerizing for sport-oriented riders looking for narcoticlike exhilaration on their favorite backroads. 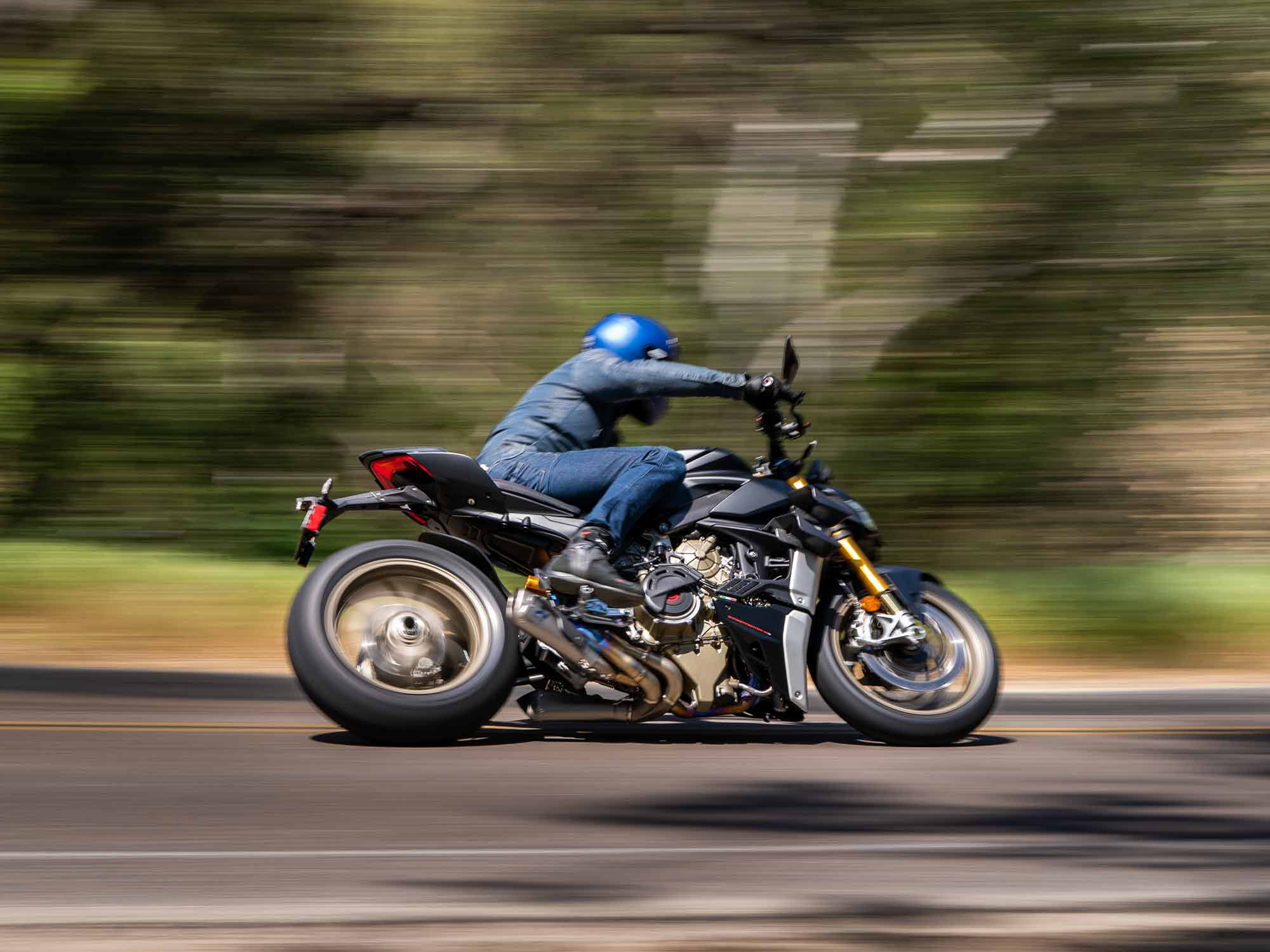 There are a lot of neat liter-and-above class naked bikes but none deliver the performance and pure exhilaration as Ducati and its Streetfighter V4 S.

There’s certainly no shortage of awesome liter-and-above sized naked bikes, but no other model can touch the performance, character and charisma of the Streetfighter V4 S. Add in a couple of key components from the Italian company’s accessory catalog and now you have a machine that further stands out from the competition. 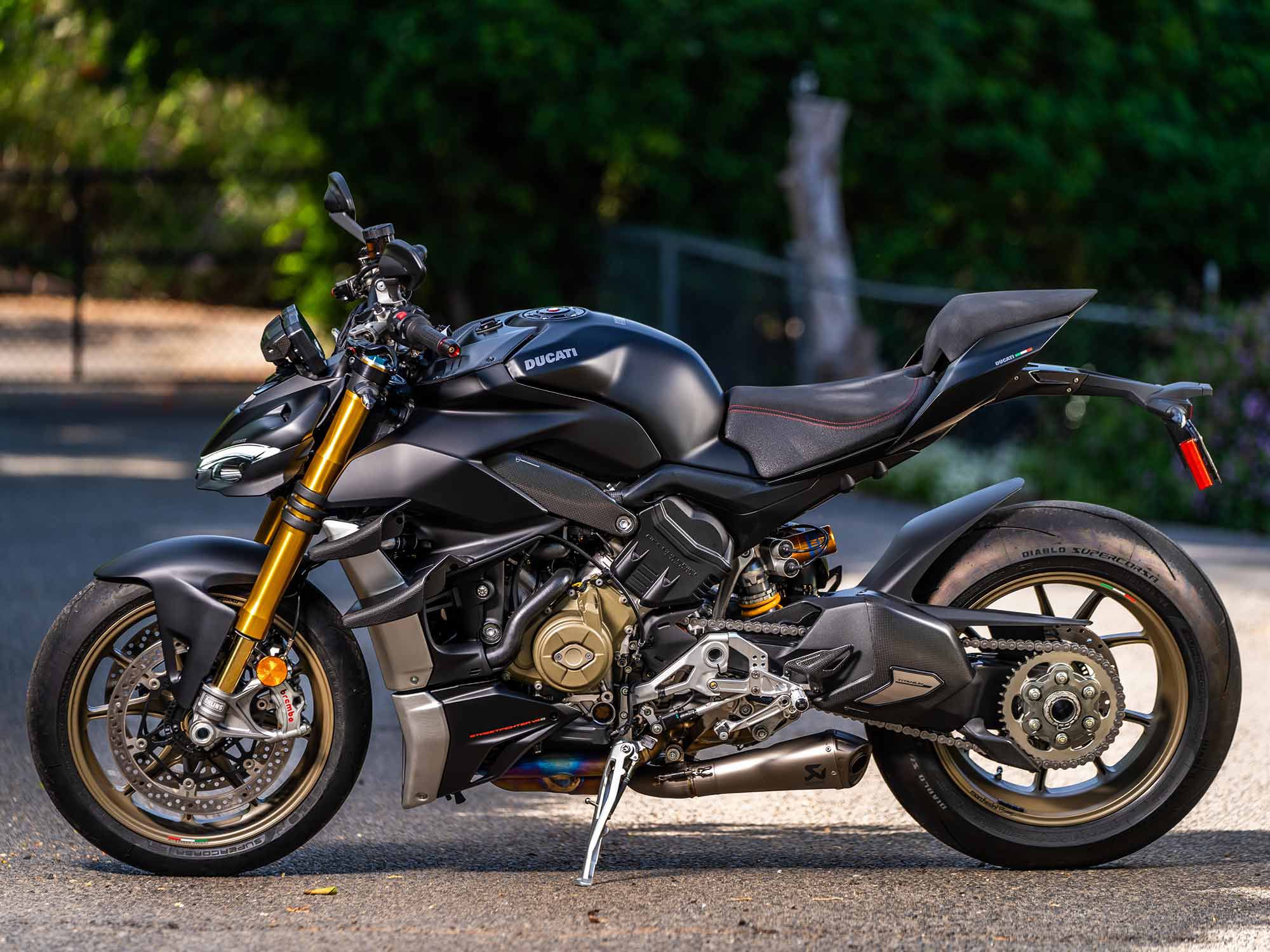 Price aside, the 2021 Ducati Streetfigther V4 S is a big deal. If you’re looking for the utmost in road-going naked bike performance, this vehicle is it. 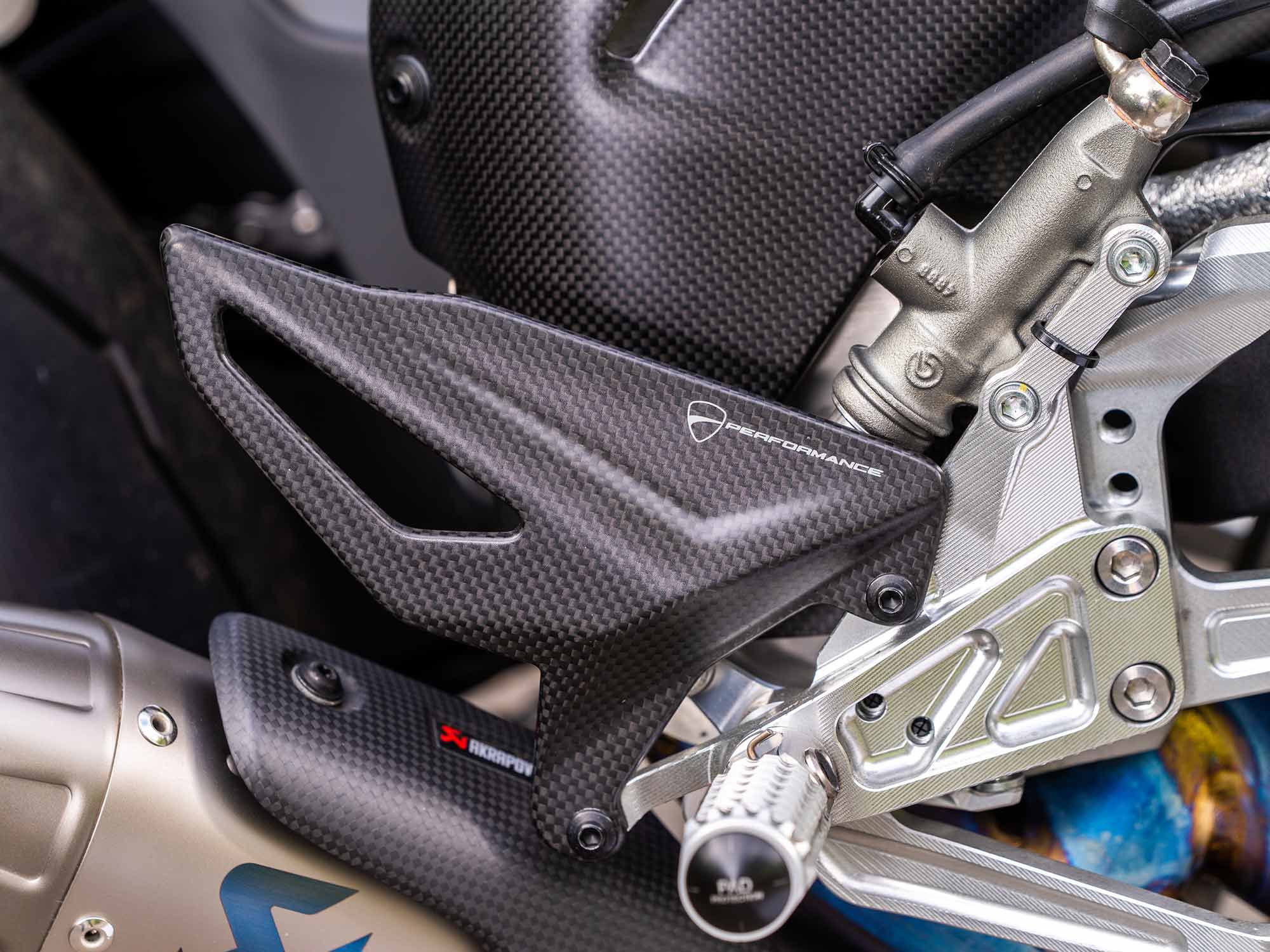 The intricately machined accessory rearsets are a must-have in our book. We love the added comfort and wide range of adjustment the foot controls afford. 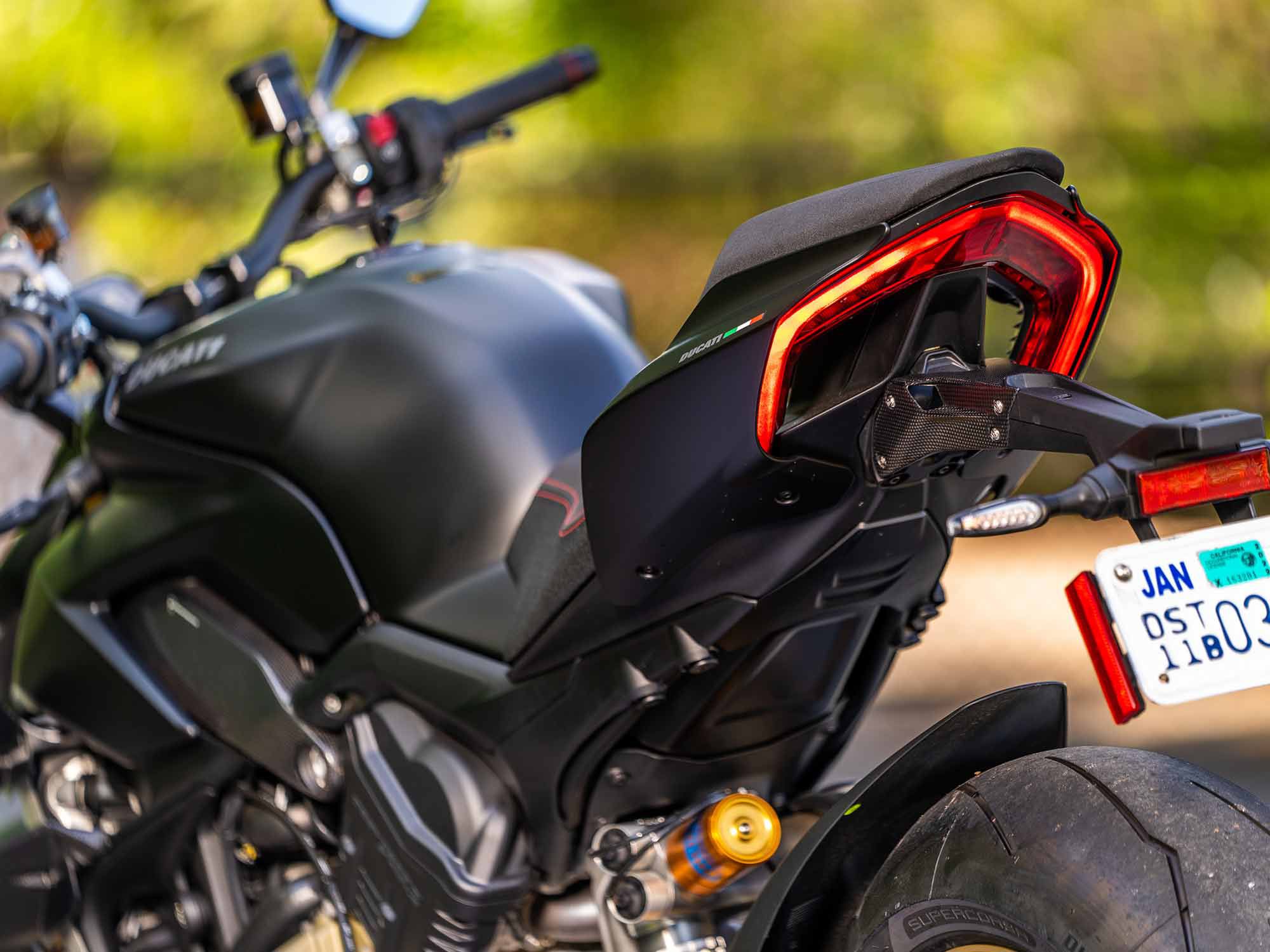 Ducati Performance accessories add tasteful touches to your Ducati motorcycle. We appreciate the precise fit and above average build quality.

However, I won’t recommend the Ducati Monster for commuting, especially if you’re riding mostly on highways. It has a sports riding position, which can literally be a pain after a while. It might be a bit better if you’re a fairly small person. I tried one and at 6′2″ I found it just didn’t fit me. It’s a small bike and not so well seen on highways, though on country roads it will do a lot better. It will probably out accelerate most Harleys and will leave them miles behind on twisty roads.